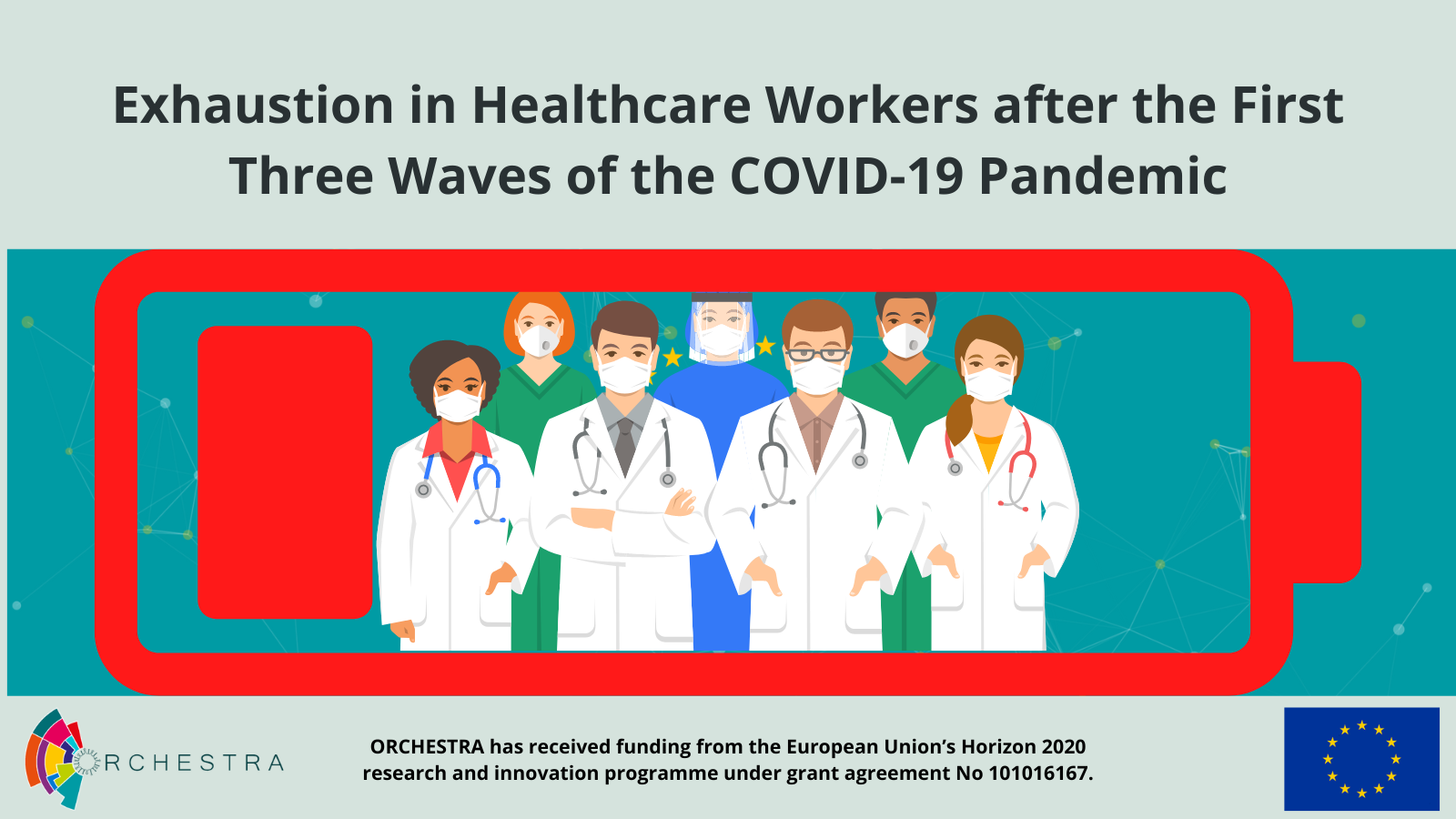 The study examined the most determining causes for exhaustion of frontline and second line healthcare workers (HCW) during the third wave of the COVID-19 pandemic. Responsible ORCHESTRA partner is the National Institute of Public Health (INSP) in Bucharest which contributes to Work Package 5, the Healthcare Workers Cohort.
Prof. Marina Otelea, is one of the authors and explains results and impact.

You used an anonymous questionnaire that was answered by about 1,800 first- and second-line Romanian Healthcare Workers. What was the most significant result that you found?
The most significant finding was that exhaustion was associated in both frontline and second line HCW with overcommitment and a perceived imbalance between effort and reward. Overcommitment, is getting involved in too much work, taking supplementary tasks to prove efficacy; however, it is an ineffective coping strategy to work pressure (work load, unsatisfactory interpersonal relations at work etc.) and not a solution. It is related to neuroticism and low job satisfaction.

In your conclusion you found that front line HCWs were at higher risk for exhaustion than second line HCWs – yet, you found that frontline HCWs “managed better the content”. What do you mean by that?
The International Labour Organization (ILO) defines the content of work in terms of workload, work schedule, task design whereas the work context as organisational culture, role definition, interpersonal relations, carrier evolution. It looked like that, during the third wave, the work content was better re-organized/adapted for the frontline HCW, but still inefficient for the second line ones.

You used the Siegrist Model. What is it about?
The model considers that organisational stress derives from high workload and low reward (recognition of merits, respect, promotion, financial reward).

What kind of questions did you ask?
Questions related to the perceived effort and reward and also to overcommitment attitude (thinking constantly about work, lack of work-life separation etc.). Those questions aimed to investigate the stressors. The effect was the exhaustion, which was assessed with an adapted questionnaire form the initial Maslach questionnaire for burnout.

“The study was conducted in a healthcare system that is still poor according to European standards and covered a large spectrum of occupations in the medical sector, two distinctive characteristics that are approached rather infrequently in publications regarding the negative impact of the current pandemic in HCW [26].”. Do you have any other studies in ORCHESTRA to compare the different situations of HWCs across Europe?

Unfortunately, the other countries have used different measures for exhaustion and other types of influencers.

How can healthcare workers benefit from your study?

First, we have shown that the Siegrist questionnaire (which is free to use) is able to identify those at high risk of exhaustion. Secondly, it looks that the general measures, which were imposed on frontline HCWs were more efficient than the ones (less defined) for the second line HCWs. It also shows that the major responsibility and stress was on doctors, which is different from other countries in which nurses were the most stressed HCWs.

Are there any secondary gains from your study (e.g. can the determents be used for further studies)?
There might be, but we did not mention them in the article as they would be speculative in the strict interpretation of the results. For example, the fact that doctors were reporting the highest exhaustion might be the consequence of the too centralised decision system in the Romanian medical activity, in which nurse have very few autonomy and doctors have the responsibility for everything. It also shows the fear to take initiatives and to change the organisational model without a clear direction from authorities. And maybe the lack of managerial skills in the public healthcare sector.

Thank you very much for the interview, Prof. Otelea!